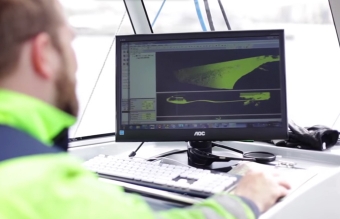 Finnvera enables the growth and internationalisation of VRT Finland Oy

Founded in 2010, VRT Finland is a company specialising in sonar inspections of underwater structures. Markets exist everywhere in the world where structures are built under water.

Learn more about the company by watching a video. 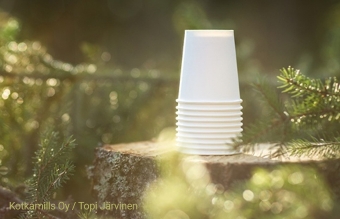 Finnvera’s first bond subscription ensured that financing could be arranged for the total investment of over EUR 100 million by Kotkamills. The investment is used to convert a paper machine so that it will produce packing board instead of magazine paper.

“The financing package ensured continued production for the Kotkamills plant that employes 500 people. Finnvera’s anchor role in the subscription ensured that the bond issue could be carried out. The development of the bond market and the diversification of financing sources are extremely important for enterprises of this size class,” says Markku Hämäläinen, CEO of Kotkamills.

The fact that Finnvera can subscribe bonds improves enterprises’ possibilities to obtain financing from the market. Finnvera makes its bond subscriptions at market price. A normal enterprise analysis is conducted when the project is being reviewed.

KPA Unicon of Pieksämäki, Finland, opened an export window to South Africa. Financial arrangements played a very important part for the success of the export project.

Selling equipment means engineers talking about the structure and properties of the equipment. When financing is also discussed in the sales setting with the buyer, one gets a seat at the same table with the persons who actually decide on the deals.
“A financing offer combined with sales opens doors and is really an important factor. At the same time the seller learns to understand the customer’s business better,” says Mikko Marttala, CFO of KPA Unicon.

Alongside selling, for some years KPA Unicon has offered its customers financing solutions worked out together with banks and Finnvera. “Today, financing begins to be a prerequisite for entering any competitive bidding at all.”

A couple of years ago, exports accounted for 99 per cent of KPA Unicon’s turnover, but now the figure is smaller. The company believes that imports to Russia and the rest of the CIS countries will revive.
“In terms of risks, our situation is now healthier because we had to look for new markets. Once the decision is made, results start to appear. Our future target is that one third of our turnover comes from Finland, one third from the CIS countries and one third from other export markets. A precondition for our existence is that we have exports,” Marttala sums up. 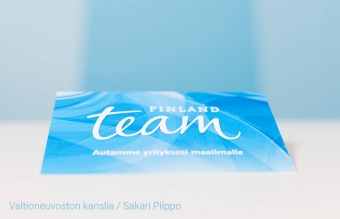 Companies seeking growth through internationalisation are served by the Team Finland network, which covers all State-funded internationalisation and innovation services. The network also promotes investments to Finland and the image of Finland abroad. The principal actors are organisations in the administrative branches of the Ministry of Employment and the Economy, the Ministry for Foreign Affairs, and the Ministry of Education and Culture that produce services for enterprises.

“A company is no longer sent from one service point to the next and does not need to spend time digging up several service-providers. After the initial contact made by the company or the Team Finland actors, an expert Team Finland team analyses the client’s needs and proposes which financial and expert services could be the most useful for the company at various stages of internationalisation. Team Finland’s network-based approach enhances both the quality of services offered to enterprises and the use of public resources allocated to the promotion of exports and investments,” says Petri Peltonen, Under-Secretary of State (as of 1 February) at the Ministry of Employment and the Economy.

The competition “Finland’s best summer job employer” is held every year by the student members of Akava, the Confederation of Unions for Professional and Managerial Staff in Finland. The winner in 2015 was Finnvera’s branch office in Jyväskylä. The branch office was entered in the competition by Eerika Västi, a student of economic sciences, who worked in Jyväskylä in summer 2015.

According to Västi, the best features about her summer job were good orientation to the work and a friendly work community that emphasised caring. Supervisors regularly asked how things were going and were genuinely interested in suggestions for development. Orientation, carried out together with Finnvera’s branch office in Tampere, also made it possible to get to know the other summer worker in the region and to share experiences. Västi also considered it important that she was given more responsibility as she learned more. She worked for the summer under Account Manager Heli Liinanki.

In its decision, the award jury praised Finnvera for its inspiring atmosphere conducive to development and for encouraging, motivating, and guiding young workers. The appreciation of young people was seen especially in the supervisors’ positive approach and in the way summer workers were oriented to their duties. 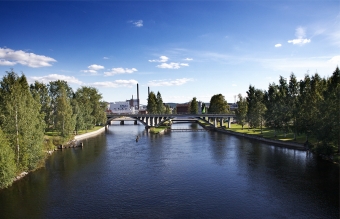 Finnvera is participating in the financial arrangements for the world’s first bioproduct mill, to be constructed by Metsä Group in Äänekoski, Finland. Valued at EUR 1.2 billion, the investment project is the largest ever carried out by the forest industry in Finland.

Finnvera provides guarantees for about half of the debt needed for equipment purchases from Finland. Finnvera’s guarantee covers 80 per cent of a credit of EUR 400 million. Apart from Finnvera, six commercial banks, the Swedish Export Credits Guarantee Board (EKN) and the European Investment Bank are also participating in the financial arrangements.

“Our project is based on a careful overall assessment of the profitability of the pulp business and the long-term market situation. Financing is a central element of the whole project, and the fact that both Finnvera and the State of Finland are participating in sharing the financing risk significantly reduced the limit load of commercial banks. The loan guaranteed by Finnvera is an important component of overall financing. Conforming to the OECD terms, the loan has a sufficiently long maturity and in general offers competitive terms. Finnvera plays one of the key roles in the financing package,” says Kari Jordan, President and CEO of Metsä Group.

According to Jordan, the goal in equipment purchases was to ensure that the technology, delivery reliability, and commercial terms were the best available. It is positive that the leading technology suppliers for the pulp industry are companies operating in Finland.

“It is important that Finland has a competitive organisation promoting exports and an operating model that levels the playing field between companies operating in Finland and their competitors. Here Finnvera is doing good work, and the amendment made to the Act on the State’s Export Credit Guarantees in 2014 is an example of dynamic development to secure the prerequisites for exports,” says Kari Jordan.

“The project will have a positive impact on Finnish exports, as it is expected to boost exports by EUR 0.5 billion annually. The investment also has substantial effects on employment,” Executive Vice President Jussi Haarasilta says. 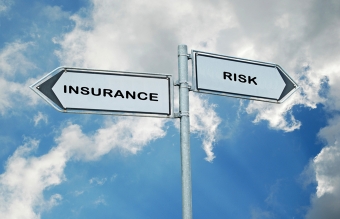 Russia’s economic situation and the increased credit loss risks create uncertainty for the exports of Finnish companies. Raisioagro Ltd, a Finnish manufacturer of animal feeds, has exported its products to Russia since the 1990s and has used Finnvera’s credit insurance since the early 2000s. Sales Director Erik Norrgård of Raisioagro explains that successful trading in Russia requires, in particular, trust between the seller and the buyer.

Thanks to its long experience, Raisioagro has managed to find reliable and well-established partners in Russia, but the company also has experience of situations where the buyer has not paid as agreed. When the buyers’ insolvency became evident, Finnvera’s export credit guarantees eased Raisioagro’s situation. On the basis of the guarantees, Raisioagro was paid compensation for the sales receivables it did not repatriate.

For an enterprise engaged in foreign trade, consideration of buyer risks and the buyer’s solvency is part of risk management. Unprotected risks may become fatal for the enterprise’s cash flow and profitability.

According to Erik Norrgård, exports to Russia are complicated by the corporate culture, where it is very difficult to obtain access to companies’ managers. In addition, the rapid growth and indebtedness of companies pose risks to commerce. Norrgård recommends that enterprises planning exports to Russia take out guarantees. It is also advisable to prepare thoroughly for the initial investigation and for any barriers to sales that might exist. Restrictions posed by the customs and other authorities often come unexpectedly.

“It’s good to be prepared for the fact that, in particular, buyers associated with primary production do not necessarily buy anything without some sort of a limit. The risk must always be weighed case-by-case. The Russians are a proud people, and it is good for neighbours across the border to recognise these realities for commerce. Especially in these times, Finnvera and other additional assistance is needed in exports to Russia.”