The Acts on Finnvera define the tasks whereby Finnvera influences the development of enterprise and employment in Finland. Every fourth year, the Ministry of Employment and the Economy sets goals for Finnvera. These apply to issues such as the focus of operations, the impact and efficiency of operations, and capital adequacy.

Financing is grounded in the Acts and Decrees on Finnvera, international agreements and EU legislation, the Government’s commitment to compensate for some guarantee and credit losses, and in the credit and guarantee policy confirmed by Finnvera’s Board of Directors.

The core of Finnvera’s strategy consists of financing for the growth, competitiveness, and internationalisation of Finnish enterprises and improving the availability of financing for start-up enterprises. Finnvera has succeeded when its clients succeed.

Finnvera carries out its operations in accordance with the service practices defined for client segments and the ISO 9001 certified operating system. The operating system and its effectiveness are evaluated on a regular basis using both internal and external audits. The observations made during the audits help Finnvera to develop the operating system continuously and to address any anomalies.

Vision, values, and strategy in brief

The strategy aims at achieving a better client experience, effectiveness, and team play

Finnvera’s vision is to be a provider of financing for growth, competitiveness, and internationalisation. We are proceeding towards our goal by revising our working methods, by developing our product range, and by strengthening our know-how and cooperation with other public and private providers of financing. We are active and want to offer the best customer service in our reference group. 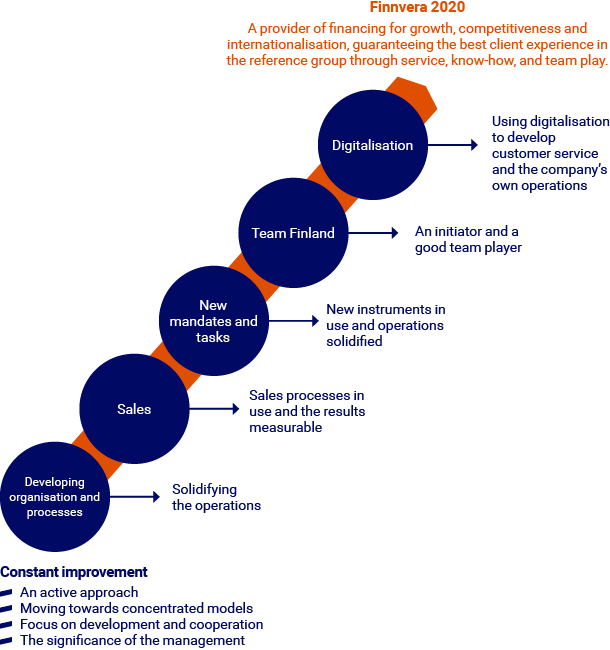 Finnvera’s strategy is updated annually. The process starts early in the year, when the Board of Directors reviews the attainment of the goals set for the previous year and discusses new goals. The background information needed for the work is obtained by examining the goals set by the owner, by analysing the operating environment, by conducting inquiries among clients and the personnel, by reviewing clients’ expectations, and by monitoring competitors’ activities. The outline prepared by the Board of Directors for the coming strategy in May serves as the basis for the strategy proposal that the Management Group submits to the Board. The Board confirms the strategy in September.

The business and support units then prepare their own annual goals, which are specified in autumn, during annual planning and budgeting, and are approved by the Management Group. Finnvera’s Board of Directors confirms the annual goals and the budget in December.

Implementation of our strategy in 2015

About one out of five Finnish enterprises that have outside financing are Finnvera’s clients. In 2015, a total of 3,556 enterprises started their operations with the help of financing from Finnvera, and 2,126 enterprises seeking growth through internationalisation were co-financed by Finnvera. When financing start-up and internationalising enterprises, Finnvera can assume greater risks than normally, since the State compensates for a higher percentage of their potential losses than in the case of other financing. Greater risks can mean, for example, less collateral or a higher share of financing.

It is not the intention that Finnvera’s financing would replace bank financing or that Finnvera would compete with banks. In order to prevent the distortion of domestic competition, Finnvera makes every effort to avoid long-term client relationships with enterprises established on the domestic market and steers them towards bank financing.

As in competitor countries, Finnish export enterprises manufacturing capital goods win deals by offering comprehensive solutions that involve long-term financing required by foreign buyers. In line with other countries, Finnvera helped ensure the competitiveness of these export enterprises not only by offering export credit guarantees, but also by financing export credits granted by banks to foreign buyers.

During the past couple of years, Finnvera has carried out the largest reorganisations in its history. The new regional division was already implemented in the previous year, and development of service production associated with the regional reform continued during 2015. At the start of 2016, the Service Centre was incorporated into the new Service Production Unit, which will house activities pertaining to SME services and financing decisions when their production in a centralised manner is sensible. The aim of these measures was to ensure even more focused and faster customer service.

Smaller financing decisions are made in the regions but decisions involving larger sums are made by the centralised Credit Decision Unit. The unit began operations at the start of October, and is led by Deputy CEO Topi Vesteri. The goal of the reform is to ensure uniform credit decision practices in the whole country and, at the same time, to speed up decision-making even more. The largest commitments continue to be processed by the Management Group for Financing and Finnvera’s Board of Directors.

During the period under review, in line with its strategy, Finnvera directed its financing increasingly often to meet the needs of start-ups, enterprises aiming at growth and internationalisation, and enterprises in various situations of change. The priorities will remain the same while effort is made to ensure that companies with an established role on the domestic market can get the financing they need on the commercial market. An important element when implementing the strategy is to maintain the competitiveness of export financing.

Finnvera helps secure the availability of financing for enterprises. The new tools allocated to Finnvera in the Government Programme and in the key projects include the programme for financing ownership arrangements, the adoption of mezzanine financing intended for SMEs, and utilisation of the European Fund for Strategic Investments (EFSI). The competitive export financing system is maintained, for instance, by basing the financing of export credits on Finnvera’s own acquisition of funds, by developing financing products for trade, and by raising Finnvera’s mandate to grant export credit guarantees and loans.

Finnvera plays an active role in implementing and developing Team Finland services. The service model for domestic players will become established in 2016: the regional network activates and guides potential growth companies to embrace the services, while the nationwide Team Finland team analyses enterprises’ needs and provides a service concept for the growth and internationalisation of enterprises that is uniform in the whole of Finland. The exchange of client information between Team Finland actors is improved, and services are focused on the identified client groups. The Team Finland actors operating in the Helsinki region – Finnvera, Finpro, and Tekes – will move to a joint premises in Ruoholahti in autumn 2016. Finnish Industry Investment Ltd will follow at the start of 2017.